National Council(JCM) Secretary Shri.Shiva Gopal Mishra writes to Finance Minister regarding the major important issues of Central Government Employees as Pre-Budget consultation on 17th June 2014. He insists in the letter, Exemption of Income Tax be raised to 5 lakh, make adequate allocation of funds for Merger of Dearness Allowance, Withdrawal of New Pension Scheme and allocation of requiste funds be made for Interim Relief.
The letter is reproduced and given below for your kind consideration…

Respected Sir,
Reg. : Pre-budget consultation
I, on behalf of National Council (Joint Consultative Machinery), representing more than 36 lakh Central Government Employees’, once again congratulate and welcome you on your taking over as Finance Minister of the new government, recently formed on the verdict of the people of this country.

We take this opportunity to bring to your kind notice some important major issues that need to be taken into consideration while finalising the General Budget of our country for the year 2014-15. This would definitely boost the morale of the Central Government Employees and simultaneously help a lot in overall development of our nation.

Some of the important issues are appended below for your kind consideration;

(i) Effective measures need to be taken to arrest the skyrocketing price rice, particularly of essential commodities effecting common man and to contain inflation, ban speculative forward trading in commodities, strengthen the Public Distribution System, ensure proper check on unlawful hoardings and rationalise the tax duty/cess on petroleum products with a view to minimise burden on common people.

(ii) Adequate allocation be ensured in infrastructure development in order to stimulate the economy for job creation. Necessary measures are required to be taken for strengthening the Public Sector for job creation and rapid development of the country as this sector plays vital role in this regard. Plan and non-plan expenditure should be adequately increased to stimulate job creation and ensuring consistent income of the people.

(iv) In the context of huge job losses and mounting unemployment problem, the ban imposed on recruitment in Government Departments, Public Sector Undertakings and Autonomous Bodies should be lifted as per recommendation of the 43 Session of the Indian Labour Conference, Instructions of the Finance Ministry to abolish the posts which are not filled for one year should be withdrawn and thumb rule surrender of posts in Government Departments and Public Sector Undertakings be stopped, while new posts be created fornew assets and increased workload without imposing any conditn of “Matching Saving” etc.

(v) In the wake of appointment of VII CPC by the former government, allocation of requiste funds be made for Interim Relief and to implement the recommendations of the VII CPC.

(vi) All the restrictive provisions based on poverty line in respect of eligibility coverage of the schemes under the Unorganised Workers’ Social Security Act, 2008 need to be done awaywith and adequate resources be allocated for the National Fund for Unorganised Workers with a view to provide Social Security to all Unorganised Workers, including Contractual/Casual Workers in ne with the recommendations of the Parliamentary Standing Committee on Labour as also the 43rd Session of the Indian Labour Conference, for which the word “Below Poverty Line” need to be re-defined at the earliest.

(vii) Necessary provision in the budget be made for providing essential services, viz, housing, public transport, sanitation, water, schools/colleges, creche for children, healthcare for the workers in the new emerging industrial areas as also separate women hostels for women workers where their participation is high.

(viii) Budget provision is required to be increased for elementary education, particularly in the wake of implementation of the justify to Education, as the same can be proved an effective tool to combat Child Labour.

(ix) The prevalent system of computation of Consumer Pñce Index needs to be reviewed owing to heavy financial loss to the workers in the present system.

(x) The ceiling limit for exemption of Income Tax for the salaried employees be raised to atleast 5 lakh per annum and fringe benefits, like housing, medical aid education facilities, Running Allowances, be exempted from Income Tax net in totality.

(xii) The genuine demand for Merger of Dearness Allowance with Pay be accepted and adequate allocation of funds for this purpose be made in the budget.

We also put-forth the following suggestions in regard to resource mobilisation for the purpose of fulfilment  of the aspirations of the common people of the country in general and the working class in particular:-
A Progressive Taxation System should be put in place to ensure taxing the rich and the affluent sections who have the capacity to pay at a higher degree. Corporate service sector, traders, wholesale business, private hospitals and institutions etc. should be brought under broader and higher tax net Increase taxes on luxury goods and reduce Indirect Taxes on essential commodities, as at present overwhelming majority of the population are subjected lo Indirect Taxes that constitute 86% of the revenue.

Concrete steps must be taken to recover huge accumulated unpaid tax arrears which has already crossed more than Rs.5 lakh crore on Direct and Corporate Tax account alone, and has been increasing at a geometric proportion. Such huge tax evasion over and above the liberal tax concessions, already given in the last two budgets, should not be allowed to continue.

The steps taken by the new Central Government, constituting Special Investigation Team(SIT) for recovering black money are praiseworthy and we urge for speedy action in the matter.

Effective measures need to be taken to unearth huge accumulation of black money in the economy, including heavy amount of uncounted money in the tax heavens abroad and within the country, and necessary provisions be made to bring back illicit flow from India, which are at present more than twice current external debt of US$ 230 billion. This huge money be directed towards providing Social Security lo the working class.

We do hope, the above-mentioned views would receive due consideration from your good-self. Besides the, there is an urgent need for continuous dialogue with the Central Government Employees, for which, the National Council(JCM), being ai effective tool, has always played a vital role during the past, however., it is quite unfortunate that the same has been made ineffective during the recent years. It is our considered view that, in the larger interest of the development of the nation, continuous dialogue on the problems of the Central Government Employees through the JCM is necessary.

It is, therefore, earnestly requested that, dialogue in the pre-budget discussion with the JCM(Staff Side) should also be ensured, so that the views expressed by them can also be taken Into account while finalising the Budget. 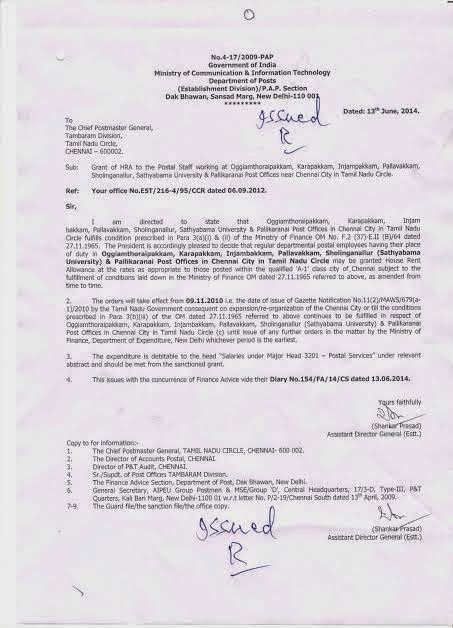 Press Release about Government’s plan to make six days a week working in the administrative offices of Central Government.

Feedback of the meeting held between the Cabinet Secretary(Government of India) and Secretary(Staff Side), NC/JCM

airf.ncjcmstaffside | June 14, 2014 | Reply
Feedback of the meeting held between the Cabinet Secretary(Government of India) and Secretary(Staff Side), NC/JCM To Download  Reply of Staff Side please scroll down Download Link Here
END_OF_DOCUMENT_TOKEN_TO_BE_REPLACED

airf.ncjcmstaffside | June 14, 2014 | Reply
Comrade Shiva Gopal Mishra has written to Cabinet Secretary for the Merger of DA with Pay and sanction of Interim Relief for the Central Government Employees To Download  Reply of Staff Side please scroll down Download Link Here
END_OF_DOCUMENT_TOKEN_TO_BE_REPLACED

Holding of meeting of National Council(JCM)

airf.ncjcmstaffside | June 10, 2014 | Reply
Raising of exemption limit of Income Tax & exemption of all allowances from Income Tax – Com. Shiva Gopal Mishra Secy/NC JCM writes to Finance Minister for including this demand into Union Budget – 2014 Download Link is given below:- Download Link Here Letter to F.M
END_OF_DOCUMENT_TOKEN_TO_BE_REPLACED
Posted by Kvs at 09:36 1 comment: