REPLY GIVEN BY THE CHIEF PMG, TN ON OUR MEMORANDUM DT. 17.6.2016 IN CONNECTION WITH THE DAY LONG DHARNA IN FRONT OF O/O CPMG, TN BY TN P3 CIRCLE UNION

WE HAVE TAKEN UP ALL THE ISSUES CONNECTED WITH CBS/ CIS WITH THE CPMG, TN ON 15.6.2016 DEMANDING FOR SETTLEMENT AND  WE HAVE CONDUCTED DAY LONG DHARNA IN FRONT OF O/O CPMG,TN ON 17.6.2016 PRESSING ON THESE ISSUES.

ON THE DAY OF THE DHARNA,  AS PER THE DIRECTIONS OF THE CPMG, TN ,  WE HAVE MADE DISCUSSIONS WITH THE  DPS HQ ON THE ISSUES RAISED. BASED ON THAT REPLY WAS GIVEN  BY THE  CPMG, TN  ON 24.6.2016 ON THE  SPECIFIC ISSUES RAISED BY OUR CIRCLE UNION. THE COPY OF THE SAME IS ENCLOSED HEREUNDER.

IN CONNECTION WTH THE  ISSUE OF  IMPLEMENTATION OF ORDERS OF DTE. ON BUSINESS HOURS ,  THE CPMG, TN HAS REITERATED AGAIN HIS OWN STAND  VIZ. NOT TO IMPLEMENT THE ORDERS WHICH WOULD  AFFECT THE  PROSPESTIVE BUSINESS OF THE DEPARTMENT AND  ALSO HE REPLIED ON 23.6.2016 IN PERSON THAT THE MATTER WAS ALREADY DISCUSSED WITH THE  MEMBER (P) AND HE AGREED TO ISSUE CORRIGENDUM TO THE ORDERS OF DTE. VIZ. 7.1.2016. 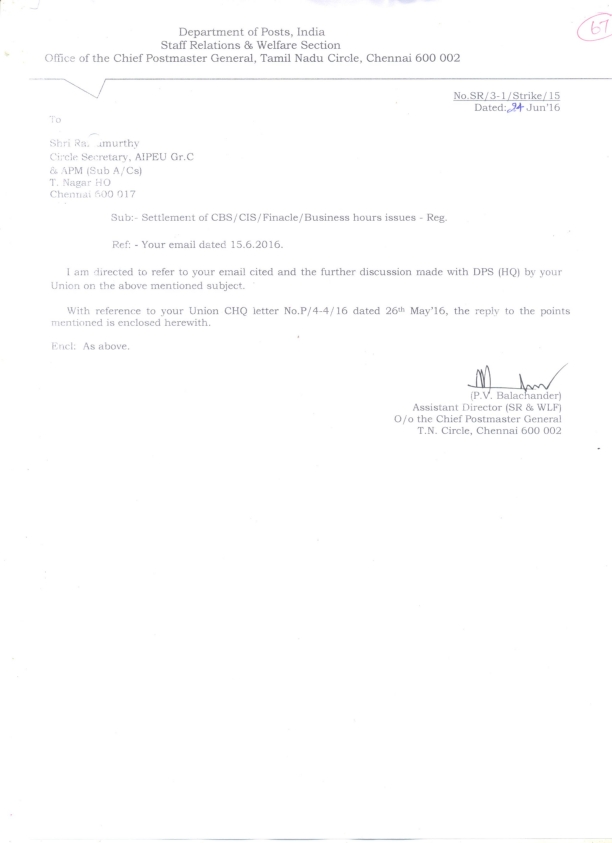 Finacle
Point 1: The main base for the non-accessibility of the Finacle server, is either with the Main server capacity or the programming done by the Infosys. Bandwidth alone is not the reason for the slowness in Finacle. So,server as in Railways has to be installed. If necessary post offices across the country may be divided into four zones and one server for each zone with inter accessibility may be installed. The bandwidth for single handed and other S.Os should be increased. To overcome the existing problem additional servers shall be provided to bear the load.
Reply :            Since start of June 2016, performance of Finacle availability has shown considerable improvement. Option of adding additional Servers are also examined at Directorate level.

Point 2: From the date of migration, the Finacle server is not running promptly and takes very much time in processing even a single transaction.

Reply:           Directorate has informed that WAR ROOM set up at Infosys campus Bangalore will continue to monitor the health of Finacle. DPS, SK Region Bangalore has been nominated as coordinator  from the Department.
Report on inaccessibility/slowness issues is submitted on daily basis to Directorate for action
Since start of June 2016, performance of Finacle Server is satisfactory

Reply: Agent portal was not working during month of May and now it is working smoothly.  The issue was already taken up with Directorate and SB order was issued on this regards to accept the Agent schedule through BCP in case of slowness or inaccessibility.

Point 4: Variety of services in Finacle Server found to be inaccessible on routine basis. Whenever one error rectified, another appears in a consecutive manner.

Reply: Since start of June 2016, no such issues are occurring

Reply: Policy matter to be taken up with Directorate. In Finacle due to performance issue, Maker & checker concept has been adopted for all SOLs inspite of status.  In single handed office , in fact it gives an opportunity to the SPM to check for correctness of transactions entered by him as CPA in his Supervisor  ID.

Point 6: Whenever the deposits for SSA, SB and PPF is made, the transid directly enters into posted stage and no modification/deletion is possible in this stage. In the later stage supervisor finds any mistake during verification, the only way to get rid is the verification of that particular transid. For this the only solution is that the deposit made by counter clerk firstly has to enter in the entered stage which allows the rectification of any kind of mistake.

Reply:  This will be taken up with Directorate for consideration

Point 7: DMCC is pressurizing to execute EOD on 2000 hours daily. And after this they are not providing any support to the staff who is working late hours in the night. Workload of transactions is that much that it is not possible to finish the work well before 2000 hours.

Reply: Instruction have been issued from Directorate not to enter any new transaction after 1700 Hrs. and regular verification of transaction by supervisors for timely completion of EOD.

In CPC Staff remain at CPC upto 10.30 pm and leave the office only after completion of Pre EOD and EOD First menu for all SOLs

Point 8: The following additional issues have also to be sorted out.

Reply: At present only PPF menu is used for SSA deposits and hence the issue.  CEPT has already stated that when separate menu is enabled for SSA these validations will be enacted

(ii)         For Cash Certificates, either the present system of Certificates with specified denomination has to be dispensed with as in banks for Fixed Deposit or Higher denomination up to Rs.100000/- to be introduced for all Post Offices as printing of cash certificates consumes much time.

Reply:  Demat of certificate is already under consideration of Directorate

(iii)         The supervisors should be given option to reconcile the errors committed by the clerks at counter while making deposit entry with reverse option as in PPF deposits.

Reply:  While verification the Supervisors can check and option is there to delete the transactions which are wrongly made by the CPA if they are in entered state (other than SB& SSA)

Reply:  This will be taken up with Directorate for making changes in Software